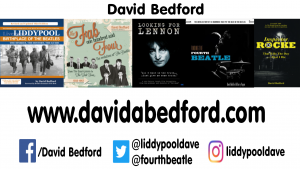 6th July 1957 will go down in music history as the day John Lennon met Paul McCartney for the first time, and everything changed!

John’s group The Quarrymen had been added to the program for the annual Woolton Village Fete being held at St. Peter’s Church, Woolton.

For my latest book, “The Fab one hundred and Four: The Evolution of The Beatles”, I have spoken to many key eyewitnesses, including The Quarrymen, to piece together the true story of that momentous day.

Also included in a book for the very first time are the photographs taken by Quarrymen banjo player Rod Davis’ father of the parade, where you can see the marching band, the scouts and guides, young people’s groups and of course, The Quarrymen themselves.

However, the key interview was with Ian James, Paul McCartney’s school friend who revealed the secret behind the success of Paul’s audition to John. Ian taught Paul to play guitar and went on to give both John and George lessons. Ian confirmed what we had long suspected about Paul’s audition in the church hall of St. Peter’s – that Paul had learned to play a right-handed guitar upside down!
Read the full story in “The Fab One Hundred and Four” – more details at www.fab104.com

“A treasure chest of research and a visual delight, this will prove to be a work no Beatles fan should be without.”
Bill Harry, founder of Mersey Beat
“David is defining and refining Beatles history” – Edd Raineri, The Beatledd Fab Four Hour
I READ THE NEWS TODAY, OH BOY! “Check out “The Fab One Hundred and Four,” a new book written by author/ Beatles scholar David Bedford. Exhaustively researched and illustrated with terrific (and rare) photos, the book tills the fertile soil of the band’s early history by examining the Liverpool musicians who influenced John Lennon, Paul McCartney, George Harrison and Ringo Starr” Michael Starr, New York Post
Read the full story in “The Fab One Hundred and Four” – more details at www.fab104.com